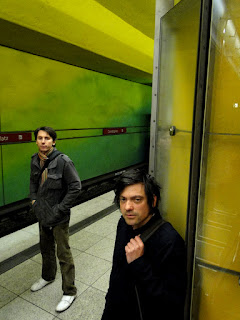 You've had the free download, you've joined the facebook page, and seen our two maudelin minstrels cross-examine each other as Fij asked Bickers, and Bickers asked Fij.  Now it was your turn to put the two under the spotlight, as we asked you to turn interrogator.

Find out who the pair have cast in the upcoming "Bickers & Fij" Hollywood biopic movie, who is in Terry's fantasy band, what animal Pete thinks Terry is, and what the pair's reaction to Simon Cowell was when he rang to ask about a "Pete Fij/Terry Bickers" X-Factor Special.

There will be a chance to repeat the experiment, but feel free to drop a line in the meantime - don't be a stranger

Terry you mention Magazine and the Banshees, and it's really interesting to read about these and other influences. I read somewhere that John McGeoch played on Need For Not - is that true, did you know him and was he involved with Levitation in any way? I also read somewhere that you have/had one of his guitars, a Yamaha SG 1000 i think (as seen in the Spellbound video for example). It's kind of fascinating to me if you are connected like that. Thanks!

Terry Bickers (TB) : Hi, it's not true that John McGeoch played on ' Need For Not' and I did not know him unfortunately. I did get to meet Howard Devoto a few times though through an aquaintance who worked on his 'Jerky Versions Of The Dream' solo album. I don't have any of John McGeoch's guitars, wish I did!


Ahoy Pete/Terry - It's Simon Cowell on the phone. He wants to do a Fij-Bickers themed X-Factor show this weekend. Are you up for it?

Pete Fij (PF) I have no problem though it promises to be a depressing night with song after song of maudelin tunes. Having said that, i think a lot of what we play are actually pop songs that are masked by a veil of sadness and melancholy. I have an obsession with the Eurovision Song Contest, and before I hang my song-writing hat up I'd love to write a song for the competition. I've already had a couple of stabs, but I'll just keep on till I get it right.

(TB) I would be up for it as its always interesting to hear other peoples interpretations of your songs. There are a few interesting House Of Love covers on Youtube.

Hi Terry and Pete. Have either or both of you got songs that you you've been working on / thinking about here and there for ages (months, even years) and you really like them but you can't finish writing them for some reason? If so do you a) leave them and wait even longer for the rest of the song to miraculously arrive? b) Set a bit of time aside (easier said than done) and force your self to finish at least one? c) try to make one OK song out of the best bits of other songs that you can't finish? d) none or all of the above. Also, what's the worst song you think you've ever written and why?

(TB) Hi, I have various sections of songs and riff's which have accumulated over the years which I should really do something with. I did complete and record a demo of one of my own songs  back in 2003 with the help of the other members of The House Of Love. It seems unbelievable that I have not recorded any other of my own song ideas since then

(PF) I have a whole album in my brain that I haven't got round to recording, or even working out the chords to yet. Sounds great in my head though! Often there are little melodies or phrases that I mean to incorporate into other songs. The lyrics to 'Homeboy' by Adorable was made by cutting up lots of lines from discarded songs, which is why to this day I still don't really know what the song is about. One of the songs ('Gravity') that I've recorded with Terry comes from a melody and chord sequence that I've been trying to use for years and years, whilst part of one of our more uptempo numbers, 'Breaking Up' comes from a riff that Terry had knocking around that he had been meaning to use, that I then took away and added to an idea I had, so sometimes those kernels of an idea can take years to finally see fruit. Re. Bad songs - there's a whole score of bad songs - but usually they don't make it as far as the recording studio. Of the one's that have 'Cool Front 24-6' b-side by Adorable stands out as being pretty ho-hum. I really can think of little good to say about it - but someone has bothered to put it up on Youtube and it's one of their favourite Adorable tracks.

Hey Pete any plans to come over to Germany or just have a show in Frankfurt or some more .. cheers,

(PF) We'd love to come and play some more dates, and we're hoping that when we release the album we can do a larger European tour and beyond. At the moment we're booking gigs ourselves, so if you have any connections in your town wherever you are & know someone who might be willing to put us on, please get them to contact us either via facebook, or email info(at)petefijterrybickers(dot)com

When Hollywood makes a movie about you guys in the not-too-distant future, which movie stars should be selected to portray each of you?

(PF) I sometimes wonder if we're not just reprising Dustin Hoffman & Jon Voight's roles in 'Midnight Cowboy'. In my dreams I'm not sure who would play us, but the film would be directed by Wim Wenders - it'd probably look great, but be a bit aimless. However after several re-writes I think the controversial version of "Bickers & Fij - the Movie" would see Will Smith taking on my role, and Morgan Freeman as Terry.

How loveable / unloveable is Alan McGee?

(PF) I haven't seen him since 1993, so I couldn't say what his loveability levels are like these days. He was undoubtedly very charismatic, and had a genuine love for music, but I felt I was on a different wavelength - he seemed to love music as much for the rock n roll aspects - the partying and the drugs - which wasn't what I was in a band for. I on the otherhand was annally analytical, in a slightly pretentious arts-student kind of way, which just wasn't really McGhee's bag either. I respected him, but we never really hit it off

(TB) Alan was very positive and enthusiastic during the early Creation day's and came over as genuine person. In relation to The House Of Love I felt that for the most part he had our bands best interest's at heart.

Pete, you had a working title for the album a few years back which I found to be painfully brilliant and awe inspiring. It was tentatively titled "Broken Heart Surgery". Will you still be using this title and any news what the final release date would be?

(PF) The album will be called 'Broken Heart Surgery' - we had a few other titles knocking around, but came full circle back to the original. There's no definitive release date as yet, but it has to be soon, otherwise I will go mad. By Summer of 2013 for the album at the latest, with a single before that. If it's not, I will buy you an ice cream.

I'd like to turn some of the questions you asked eachother around -a/  Pete what animals do you think you & Terry are?


(PF) I think Terry is an otter & I am a dog, possibly a Jack Russell.

b/ Terry -  who would be in your fantasy band?(for the sake of diplomacy lets say that both Guy & Pete are unavailable for vocal duties)

Terry - what was your effects chain in the House of Love?

(TB) Hi, my effects set up in The House Of Love was:

Can you shoot a short video of you two creating a new song? No one ever gives-up how they come up with ideas, melodies and lyrics and how they piece them all together.

(PF) One of my ongoing projects involves a bit of de-mystifying about the song-writing process. In the coming year I hope to expand expand on the project and write a whole series of songs about people I don't know - maybe you - and I will explain as I go along the thinking behind it. I aim to do a series of events online & in person, and will try to make sure some of it gets filmed.

That concludes the Q&A - but feel free to ask more questions, and we'll add them to the pile for next time. You can also keep in contact via facebook, and follow Pete on twitter, and also check out Pete's website for further insight into what he's about.