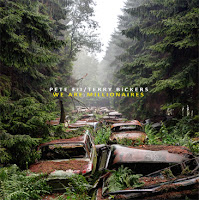 We're proud to announce the launch of a Kickstarter campaign to fund the release of the new Pete Fij / Terry Bickers album 'We Are Millionaires', recorded at Church Road studios with 'Broken Heart Surgery' producer Julian Tardo.

Still drenched in melancholy, though this time with just a little pinch of hope, the album is due for release on 10th July 2017 on CD, vinyl & download.

To help fund it, there is a Kickstarter Campaign which aside the usual fare of CDs / vinyl / badges etc includes the opportunity to buy Terry Bickers' signed guitar strap, have a Skype chat with Pete, a Christmas card sent from the melancholy duo or have a song written and recorded by Pete & Terry all about you!

The Kickstarter campaign runs until Tuesday 16th May. Details can be found here.