'We Are Millionaires' Album of The Year 2017 roundup 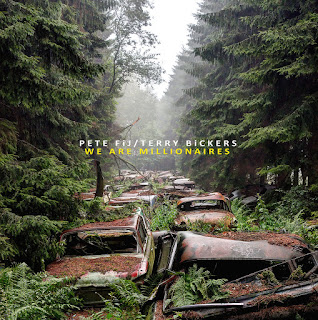 As 2017 packs away it's belongings to make the journey into our memories, we have been delighted to discover that our album 'We Are Millionaires', released in the Summer has been included in a whole host of 'best of' end of year lists.

Guttingly, we were pipped to the post to the top spot by our very good friends Fujiya & Miyagi, with our #2 placing in Brighton Music Blog

"Accomplished and powerful. The band describe their songs as being miserable, which you can’t deny, but there’s also a majesty to them too. Most of all though, they make it look effortlessly easy, which everyone knows is the really tricky bit. "
We also got the silver medal from Say It With Garage Flowers who placed it at #2 together with one of our favourite descriptions of the album:

"Like its predecessor, it’s full of deadpan humour and dry wit. With influences including John Barry, The Velvet Underground and Lee Hazlewood, and lyrical nods to movies The Third Man and The Birds, it’s like a soundtrack to an imaginary, downbeat, British, black and white kitchen sink-drama-meets spy-film – part Hancock, part Hitchcock – but this time around, there’s even some optimism"

We're #4 in the fabulously named Indie for Bunnies , #6 in Jesus MBA, #8 in Penny Black,  #15 in Platten Vor Gericht, #21 in Mitoca Discos Dual, #26 in Don’t Be Real Be Post Modern ("minor key, acoustic introspection done so beautifully it’s as if they’re singing to one another in the dustlight of a pub back room") and #53 best UK album (hmmm...not sure if that's a compliment or not) over at Cowboys & Indies who also had our bromantic track 'Let's Get Lost Together' in at  #33 in their Festive 50

Thanks to all who supported us - the journey doesn't end here with the album as we plan to promote further in 2018 , starting with a series of UK dates at the end of January.

You can buy the album here

Email ThisBlogThis!Share to TwitterShare to FacebookShare to Pinterest
Labels: Bickers, Fij, we are millionaires